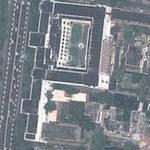 By kkeps @ 2012-08-14 09:51:58
@ 22.557775, 88.351144
Kolkata, India (IN)
The Indian Museum (Bengali: ভারতীয় জাদুঘর) is the largest museum in India and has rare collections of antiques, armour and ornaments, fossils, skeletons, mummies, and Mughal paintings. It was founded by Dr Nathaniel Wallich a Danish botanist at Serampore (originally called Frederischnagore) near Kolkata (Calcutta), India, in 1814.

It has six sections comprising thirty five galleries of cultural and scientific artifacts namely Art, Archaeology, Anthropology, Geology, Zoology and Economic Botany. This multipurpose Institution with multidisciplinary activities is being included as an Institute of national importance in the seventh schedule of the Constitution of India.[2] It is one of oldest museums in the world. This is an autonomous organization under Ministry of Culture, Government of India.
Links: en.wikipedia.org
500 views