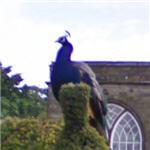 By kjfitz @ 2009-12-03 08:17:40
@ 52.279311, -1.58857
Warwick, United Kingdom (GB)
The Indian Peafowl, Pavo cristatus, also known as the Common Peafowl or the Blue Peafowl, is one of the species of bird in the genus Pavo of the Phasianidae family known as peafowl. The Indian Peafowl is a resident breeder in the Indian subcontinent and has been introduced into many parts of the world and feral populations exist in many introduced regions. The peacock is the national bird of India.
Links: en.wikipedia.org
642 views