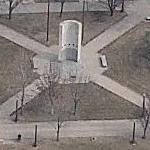 The American Legion Mall (ALM) extends from St. Clair Street to North Street between Meridian and Pennsylvania Streets. On the east side is the American Legion National headquarters, and on the west side is the headquarters of the American Legion's Department of Indiana. Looking to the south from St. Clair Street, the visitor sees the solemn grounds of the Cenotaph in the foreground. The Cenotaph memorializes the nation's first casualty of World War I, Corporal James B. Gresham of Company F, 16th Infantry and Evansville Indiana. In the background rise the World War II, Korean, and Vietnam memorials on the flanks with Veteran's Plaza and the World War Memorial anchoring the vista at its southern end.
Links: www.in.gov
647 views