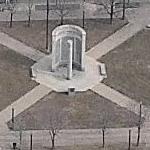 On the eastern side of the American Legion Mall, just south of the American Legion National Headquarters, is the World War II Memorial designed by Indianapolis architect Patrick Brunner. The design of the memorial is similar to both the Korean and Vietnam Memorials. However the World War II Memorial is larger and is the first to truly be a half-circle with a radius of 9 feet 2 inches. The convex side faces Pennsylvania Street. This side contains a brief history of the war and pays special attention to Hoosier Medal of Honor recipients and distinguished Hoosier units. The concave side features excerpts from Hoosier World War II veterans' letters home and a free-standing column that lists the order of the campaigns and operations of the war. Located directly next to the memorial is a computer which contains a database with the names of those Hoosier's who were killed in action. Veterans and family members are being relied on to provide the names of those veterans who survived the war since ther are no official records.
Links: www.in.gov
695 views