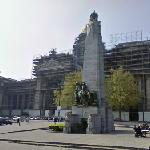 By Mike1989 @ 2013-05-16 01:34:29
@ 50.838152, 4.352426
Brussels, Belgium (BE)
The Infantry Memorial of Brussels stands in memory of the Belgian foot soldiers who fought in World War I and World War II. Designed by Edouard Vereycken, the memorial stands in front of the Palais de justice de Bruxelles and across the Place Poelaert from the Anglo-Belgian War Memorial. The memorial rests on a raised platform that overlooks the city centre of Brussels. Translated in English the inscription reads: "To the infantrymen who died for their country"
Links: en.wikipedia.org
364 views