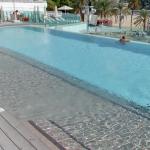 By kjfitz @ 2013-06-04 15:19:03
@ 39.508314, 2.535243
Magaluf, Spain (ES)
An infinity edge pool (also named negative edge, zero edge, infinity pool, disappearing edge, or vanishing edge pool) is a swimming or reflecting pool that produces a visual effect of water extending to the horizon, vanishing, or extending to "infinity." The term also is used to describe perimeter overflow pools (pools that may be on level parcels, wherein the water flows over one or more edges, usually flush with the decking elevation). One type of location in which the effect is particularly impressive is where the infinity edge appears to merge with a larger body of water such as the ocean, or with the sky (if the pool is located on the side of a hill or field of green).

Infinity edge pools are often seen at exotic resorts and exclusive estates, in advertisements and in other luxurious places. The infinity pool design concept is said to have originated in France, where one of the first vanishing edge designs was utilized in the "Stag Fountain" at the Palace of Versailles in the early 1600s.
Links: en.wikipedia.org
592 views