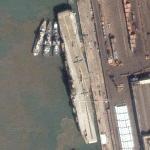 By Hinkkanen @ 2006-02-24 12:37:01
@ 18.931375, 72.8431
Mumbai, India (IN)
The INS Vikrant (formerly the HMS Hercules (R49)) was a Majestic-class light aircraft carrier of the Royal Navy. Her keel was laid down November 12, 1943 by Vickers-Armstrong of Tyne, England, and she was launched on September 22, 1945. Construction was suspended after World War II and she was laid up for possible future use. In January 1957 she was sold to India, and construction was completed at Harland and Wolff with an extensively modernized design, including an angled deck with steam catapults, a modified island, and many other improvements. Vikrant was India's only carrier for over 20 years, but by the early 1990s she was effectively out of service because of her poor condition. Even following major overhauls she was rarely put to sea. She was formally decommissioned January 31, 1997 and is preserved as a museum at Mumbai.
Links: en.wikipedia.org
2,797 views