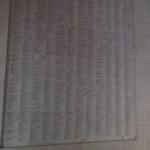 An arbitrary cut-off point of 15 August 1917 was chosen and the names of 34,984 UK missing after this date were inscribed on the Tyne Cot Memorial to the Missing instead. The Menin Gate Memorial does not list the names of the missing of New Zealand and Newfoundland soldiers, who are instead honoured on separate memorials.
Links: virtualglobetrotting.com
749 views