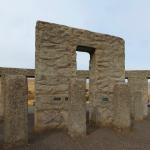 A second formal dedication of the monument took place upon its completion on May 30, 1929.
Links: en.wikipedia.org
391 views