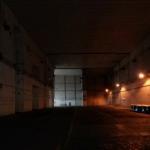 The Valentin factory was attacked by the RAF on March 27, 1945. On March 30 the US Eighth Air Force attacked. After the attacks the factory was abandoned.
Links: virtualglobetrotting.com, en.wikipedia.org
387 views