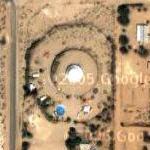 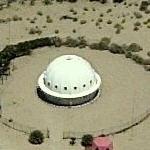 By kjfitz @ 2005-08-01 11:38:22
@ 34.294329, -116.403702
Yucca Valley, California (CA), US
The Integratron is an unusual structure that was built as a "rejuvenation machine", an electromegnetic wave oscillator contained in a 50-foot diameter dome in the desert near Landers. Constructed in the 1950's and 1960's by George Van Tassel, a former test pilot for Hughes and Douglas Aircraft, who moved into a hollowed out boulder near the Integratron site in 1947. Van Tassel was interested in UFO contacts and the metaphysics of George Lakhovsky, on whose principals the Integratron is based. The mechanical apparatus that generated the healing energy disappeared after Van Tessel died in 1978.
Links: clui.org
1,255 views

Here it is, folks, the official web site: