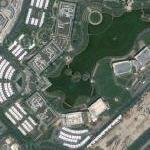 By kjfitz @ 2007-01-18 12:07:58
@ 25.094169, 55.159714
Dubai, United Arab Emirates (AE)
Dubai Internet City (DIC) is an information technology park created by the Government of Dubai as a free economic zone where companies can operate without restrictions, such as a 100% foreign ownership, which prevail in other provincial economic zones in the United Arab Emirates. This freedom has led many global information technology firms to move their regional base and resources to premises in the DIC. DIC is located right next to other industry clusters such as Dubai Media City and Dubai Knowledge Village.

The economic rules of DIC allow companies to avail themselves of a number of ownership, taxation and custom related benefits which are guaranteed by law for a period of 50 years. Companies which have established operations at DIC include Microsoft, IBM, Oracle Corporation, Sun Microsystems, Cisco, HP, Nokia, Siemens, i-mate, e-dinar, Acette and many others.

DIC presently has over one and half million square feet of prime commercial office space, and there are over 850 companies with over 10,000 workers based in it. [wikipedia]
Links: dic.ae
1,950 views