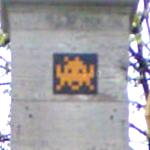 He started this project in 1998 with the invasion of Paris - the city where he lives and the most invaded city for now - and then spread the invasion to 35 other cities in the world. Los Angeles, New York City, London, Manchester, Newcastle, Geneva, Tokyo, Melbourne, Vienna, Bilbao, Bangkok, Darlington and even Mombasa are now invaded with his colourful characters in mosaic tiles.