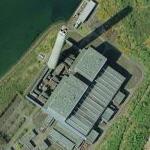 By kjfitz @ 2007-03-25 10:59:16
@ 55.897959, -4.88736
Wemyss Bay, United Kingdom (GB)
Construction of the power station began in 1970 and cost taxpayers an estimated £200 million. The station consists of two generating units and was designed to produce 1900 mega-watts of electricity. It is visible for miles around courtesy of its huge 700ft chimney and was also Scotland's first oil-fired power station. Before it opened however oil prices soared making it unproductive.

Nowadays the power station is only maintained as a strategic reserve. It was rarely used to full capacity, except during 1984 when there was the miner's strike, and production was stopped in the late 1980s. It is run by Scottish Power, a group with headquarters in Glasgow.

There have been many suggestions made over the years of what to do with the 50 acre site, including converting the area into a housing estate, but at present nothing has come of it.
Links: www.wemyssbay.net
1,040 views