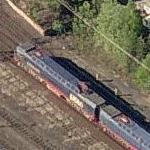 By alfjon @ 2008-06-23 14:33:49
@ 65.574136, 22.189627
Lulea, Sweden (SE)
IORE engine refers to the electric railway locomotives owned by the Swedish mining company LKAB, used for transporting iron ore from the mines in Kiruna to the shipping stations in Narvik and Luleå. IORE is an acronym of "iron ore", as well as an intentional close-match of the name carried by the fictional donkey Eeyore (Swedish: Ior). The 18 engines were produced by Bombardier Transportation, in Kassel, Germany between 2000 and 2004. They operate in pairs pulling up to 8600 metric tons on a relatively mountainous railway at a maximum speed of 60 km/h with loaded trains. The locomotive is equipped with a passenger train brake system, which allows the locomotive without train to be dispatched with 80 km/h to new work orders.

With 700 kN they are reported to be the strongest cargo locomotives in the world. Usually the locomotives run in pairs, seldom they can be found operating as a single unit.
Links: en.wikipedia.org
689 views