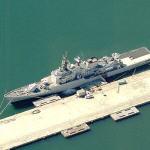 The "Maestrale" class Frigates have their primary role in Anti Submarine Warfare, even if they exhibit a wide flexibility, thus making them also capable Anti Air Warfare and Anti Surface Warfare roles. Ships of this class have been widely used in various international missions, either under NATO or ONU flag, and during normal operations of the Italian Navy.

This versatile class will be likely replaced by new types of ships, the Rinascimento class), from 2010 onwards.
Links: en.wikipedia.org
5,705 views