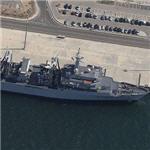 The purpose of the Marina Militare MM Etna is to fully support the long-range missions of a naval squadron, which would typically include an aircraft carrier and complete escort. The logistic support vessel has to be in position to refuel the squadron, including the air wing of the carrier, and also provide full logistic support in terms of repair workshops, spare parts, ammunition replenishment and supplies.

MM Etna is also capable of performing civil protection roles at times of crisis. The ship has high autonomous capacity to provide electrical power, fresh water and prepared meals and also has fully equipped hospital and medical facilities on board.
Links: www.naval-technology.com
1,522 views