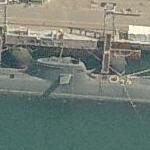 By kjfitz @ 2007-05-29 23:57:57
@ 44.088966, 9.870994
La Spezia, Italy (IT)
The German Type 212 is an advanced design of non-nuclear U-Boat developed by Howaldtswerke-Deutsche Werft AG (HDW) for the German Navy. It features diesel propulsion with an air-independent propulsion (AIP) system using Siemens polymer electrolyte module (PEM) hydrogen fuel cells. The submarine can operate at high speed on diesel power or switch to the AIP system for silent slow cruising, staying submerged for up to three weeks without surfacing and with no exhaust heat. The system is also said to be vibration-free, extremely silent and virtually undetectable.