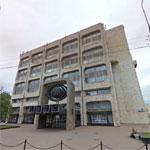 By jbottero @ 2012-11-17 14:44:47
@ 55.757433, 37.599666
Moscow, Russian Federation (RU)
The Telegraph Agency of the Soviet Union was the central agency for collection and distribution of internal and international news for all Soviet newspapers, radio and television stations. It had a monopoly on official state information which was delivered in the form of TASS Report.

It was established on 25 July 1925 by a decree Presidium of the Supreme Soviet of the Soviet Union. Tass was created from the Russian Telegraph Agency (ROSTA), the first state news agency in Soviet Russia. The agency was frequently infiltrated by the Soviet intelligence and security agencies, the NKVD and GRU. Many of its employees also voluntarily served as information sources of intelligence to the NKVD (later, the KGB).

In 1992, following the dissolution of the Soviet Union, it was inherited by the Information Telegraph Agency of Russia (ITAR-TASS).