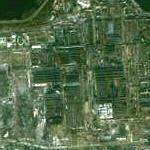 By Parabellum @ 2011-07-28 06:08:55
@ 56.838832, 53.182755
Izhevsk, Russian Federation (RU)
Izhevsk Machine-Building Plant (RTS:IGMA) (Russian: Ижевский Mашиностроительный Завод) or IZHMASH (ИЖМАШ) is a weapons manufacturer based in Izhevsk, founded in 1807 at the decree of Tsar Alexander I, and is now one of the largest corporations in its field. It makes the famous Kalashnikov series of assault rifle, along with a host of other Russian arms, including medium cannons, missiles, and guided shells. Izhmash also produces other goods, such as motorcycles and cars.
Links: en.wikipedia.org
530 views