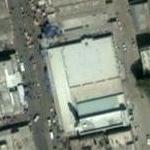 By kkeps @ 2011-03-29 16:39:52
@ 13.224436, 45.305627
Ja'ar, Yemen (YE)
A munitions factory explosion took place on March 28, 2011, in the village of Khanfar, Abyan, bordering the town of Jaʿār in Abyan Governorate, southern Yemen. The blast occurred a day after around 30 armed al-Qaeda militants raided the "7th of October" ammunition plant in the town, stealing cases of ammunition and leaving gunpowder exposed at the site; militants took over another nearby munitions factory in Khanfar. According to Al Jazeera, the initial fire was reportedly triggered by a local resident dropping a lit cigarette while inside the looted factory, as some were checking the site for weapons, which soon led to an explosion. It was loud enough to be heard roughly 15 km (9.3 mi) from the factory, and left many charred bodies at the scene.
Links: en.wikipedia.org
302 views