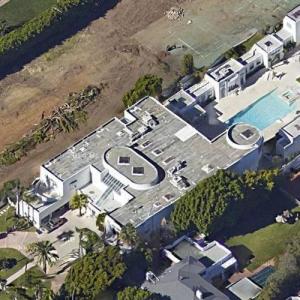 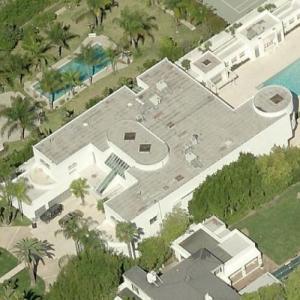 Born in London on October 4, 1937, Jacqueline Jill Collins was the middle child to Elsa and Joseph Collins. Jackie, being 4 years younger than her sister Joan, the Hollywood actress, moved to Hollywood when she was 15 years old. After trying her hand at acting, and realizing it wasn’t for her, she was convinced by her then husband, art gallery owner, Oscar Lerman to write a novel. Her first novel The World is Full of Married Men was published in 1968. Jackie Collins completed 32 novels in her lifetime. She has sold over 500 million books in over 40 countries and has had 31 consecutive NY Times Bestsellers. Eight of her novels have been turned into films and it was her goal to produce a new book every year.

The property of Jackie Collins is located in Beverly Hills, California. The two story house took over three years to build and was completed in 1992. Jackie and her then husband Oscar were inspired by the David Hockney painting “A Bigger Splash” and she set out to have a large airy building built around a swimming pool. The house was completed one week after her husband’s passing to prostate cancer. She said he never wanted to move in so she could use the house as a fresh start. The home contains an art gallery, pool room, library, cinema, gym, sauna and five writing desks. Although, Jackie said she only used two of them to write at. The home is decorated with shades of pale beige and housed an impressive sweeping marble staircase. The home is filled with Jackie’s collection of ornamental panthers and cheetahs as well as her Buddha collection. Jackie also owned the property next door and boasts Al Pacino as the neighbor on the other side.

Jackie Collins, who completed her final book “The Santangelos” for release in 2015, passed away on September 19, 2015. Jackie had been diagnosed with breast cancer 6 years earlier and never told anyone. She was said to be working on her memoir at the time of her passing. Jackie had three kids, Tracy, Tiffany and Rory, and six grandchildren. Jackie is believed to have an estimated net worth of 180 Million from the sales of her books and movie rights.
Links: en.wikipedia.org, www.celebritynetworth.com, jackiecollins.com, www.wsj.com, variety.com
4,419 views