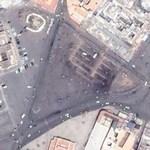 By DonMartini @ 2007-08-18 12:50:49
@ 31.625924, -7.989265
Marrakech, Morocco (MA)
Djemaa el Fna is a square and market place in Marrakesh's medina quarter (old city). The origin of its name remains unknown : it means Assembly of the dead in Arabic, but as the word djemaa also means mosque in Arabic, it could also mean place of the vanished mosque, in reference to a destroyed Almoravid mosque.

The place remains the main square of Marrakesh, used equally by locals and tourists. During the day it is predominantly occupied by orange juice stalls, youths with chained Barbary apes, water sellers in colourful costumes with traditional leather water-bags and brass cups, and snake charmers who will pose for photographs for tourists. As the day progresses the entertainments on offer change: the snake charmers depart, and in the afternoon and evening the square becomes more crowded, with Chleuh dancing-boys (it would be against custom for girls to provide such an entertainment), story-tellers (telling their tales in Berber or Arabic, to an audience of appreciative locals), magicians, and peddlers of traditional medicines. As dark descends the square fills with dozens of food-stalls, and the crowds are at their height.
Links: en.wikipedia.org
1,590 views