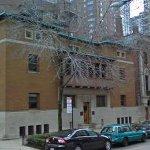 The house was completed in 1892 for Charnley, a Chicago lumberman who lived in the house with his family for about a decade.[5] The building was later owned by members of the Waller family, who invested in real estate. The house was purchased by the architectural firm of Skidmore, Owings and Merrill in 1986 and subsequently restored.[2] Seymour Persky purchased the house in 1995 and donated it to the Society of Architectural Historians who renamed the building to the Charnley–Persky House to honor their benefactor.
Links: en.wikipedia.org, power.networksolutions.com
1,183 views