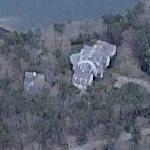 Mr. Hance serves as a Senior Advisor to The Carlyle Group. He served as the Vice Chairman of Bank of America Corporation from 1993 until his retirement on January 31, 2005 and as the Chief Financial Officer of Bank of America Corporation from 1988 until April 2004. He is a director of Morgan Stanley, Cousins Properties Incorporated, Duke Energy Corporation, and Rayonier Corporation. During the past five years, Mr. Hance formerly served as a director for EnPro Industries, Inc. and Summit Properties Inc.
Links: www.forbes.com
878 views