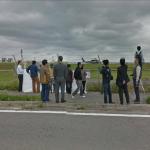 By SpiderX22 @ 2013-05-02 18:42:52
@ 24.342813, 124.181759
Ishigaki, Japan (JP)
"The HH-60H helicopter is used to transport the commander of the U.S. 7th Fleet and it is possible that he was on board. Although the Okinawa Prefectural Government (OPG) and Ishigaki City authorities had requested that the U.S. military refrain from using the airport except in emergency situations, the U.S. naval forces went ahead and used it. Peace groups held protest rallies around the airport to oppose its use by the military."
Links: english.ryukyushimpo.jp
322 views