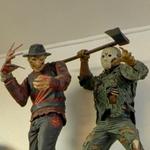 By adrbr @ 2013-02-10 12:57:35
@ 56.030805, 14.156815
Kristianstad, Sweden (SE)
Jason Voorhees is a fictional character from the Friday the 13th series. He first appeared in Friday the 13th (1980) as the young son of camp cook-turned-murderer, Mrs. Voorhees, in which he was portrayed by Ari Lehman. Created by Victor Miller, with contributions by Ron Kurz, Sean S. Cunningham, and Tom Savini, Jason was not originally intended to carry the series as the main antagonist. The character has subsequently been represented in various other media, including novels, comic books, and a cross-over film with another iconic horror film character, Freddy Krueger.
Links: en.wikipedia.org
478 views