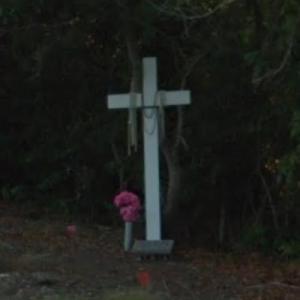 The blonde bombshell was headed to New Orleans with her three children, her boyfriend, and a driver in a 1966 Buick Electra 225. Their car drove under the back of a semi-trailer which had slowed down for an insecticide-spraying tanker truck working up ahead. The late-night spraying operation created a fog, which reduced visibility in the curve of this road.

The three adults in the front seat died instantly, while the three children in the rear survived. One of the children was 3 year-old Mariska Hargitay, who grew up to be an actress and is currently on the television drama series Law & Order: SVU.

Rumors of Mansfield being decapitated in the accident are untrue, although she did have severe head trauma. After the accident, the government mandated semi-trailers to be equipped with a rear guard to prevent vehicles from sliding underneath. This is often referred to as a "Mansfield bar".

Some believe that the exact location of the crash is about five miles east of here (west of the Rigolets bridge). After reading both schools of thought online, I believe this memorial is in the correct location.
Links: en.wikipedia.org, en.wikipedia.org, www.tapatalk.com, www.youtube.com
5,067 views