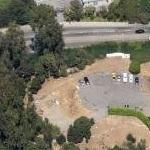 By Flunk @ 2011-09-29 18:48:41
@ 34.080246, -118.42611
Beverly Hills, California (CA), US
This is where the famous Pink Palace once stood. The house was originally built for singer and actor Rudy Vallee. Jayne and her then husband Mickey Hargitay bought it had it painted pink, because Jayne was obsessed with pink. It had a heart shaped swimming pool, which used to have "I love you Jaynie" in mosaic on the floor of it. The old front gates also boasted her initials. Jayne Mansfield died in 1967 in an automobile accident aged just 34. Engelbert Humperdinck bought the property in 1976 and claimed to have seen the ghost of Jayne Mansfield. The house was finally demolished in November 2002. Stevie Nicks is also believed to have lived there for a short time in the 1990s. The house directly behind belonged to Sonny and Cher.
2,977 views