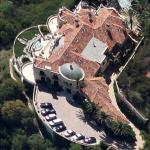 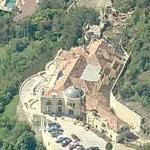 By jdubble07 @ 2008-09-14 21:27:10
@ 34.093859, -118.432492
Beverly Hills, California (CA), US
Jeff Franklin is an American television producer. He achieved most of his success in the 1980's and 90's, with family-oriented sitcoms like Full House, Hangin' with Mr. Cooper and Malcolm & Eddie. He has also been involved in other situation comedies, including Gimme a Break!, Bosom Buddies, Laverne & Shirley. He got his start writing by helping out with a few episodes of Happy Days. His shows tend to have stand-up comedians in main roles and also tend to be set in the Bay Area of California.

Franklin's home is on the site of the Manson Family Murders. Franklin purchased the home from Nine Inch Nails frontman Trent Reznor in 1994. He then tore the house down and changed the address from 10050 to 10066 Cielo Drive.
Links: en.wikipedia.org
12,277 views

Richard Landry is definitely the best architect with regards to the designing of large mansions.