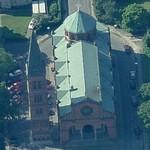 By Dania @ 2009-07-23 06:31:43
@ 55.66536, 12.522176
Valby, Denmark (DK)
The Jesus Church, Valby, is a church in Copenhagen, Denmark commissioned by second-generation Carlsberg brewer Carl Jacobsen and designed by Danish architect Vilhelm Dahlerup. It is noted for its extensive ornamentation and artworks and is considered one of the most idiosyncratic and unconventional churches in Denmark to an extend that it has been accused of blasphemy. The church is build as a mausoleum for Carl Jacobsen and his family. Their sarcophages stand in the crypt and throughout the church, the ornamentation and many inscriptions contain references to the family.
Links: en.wikipedia.org
382 views