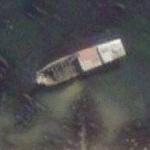 By Hinkkanen @ 2006-06-26 15:29:38
@ -51.689741, -57.879163
Stanley, Falkland Islands (Malvinas) (FK)
Wreck of the British three masted wooden barque Jhelum built in Liverpool in 1849, she sailed mostly between Europe and South America. In August 1870 Jhelum arrived in Stanley harbour, distressed and leaking with a badly stored cargo of guano. Her crew had so little faith in the ship's ability to complete her voyage that they refused to put to sea in her again and in September Jhelum was pronounced unseaworthy. The ship was sold locally to Dean & Co. and scuttled to serve as a jetty head and workshop area. Jhelum is believed to be the last surviving vessel of her kind and is an important feature of the Stanley shoreline, but age and erosion combined with the hidden damage caused by the marine borers, gribble and teredo, has left the hulk in a poor condition. The Museum & National Trust is trying to raise funds for conservation work without which the hulk cannot be expected to survive for many more years.
Links: www.falklands-museum.com
1,462 views