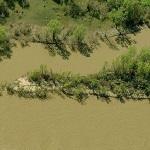 The duel was between members of well-established and wealthy families and friends in Louisiana. The duelist, Samuel L Wells III and Dr. Henry H. Maddox brought with them each five other spectators. The second for each man was Major George McWorter (Wells) and Colonel Robert A. Crain (Maddox). The four other men with Wells were: Dr. Richard Cuny, James Bowie, General Samuel Cuny and Jefferson Wells. The four with the Maddox party were: Dr. James A Denny, Alfred Blanchard, Carey Blanchard and Major Norris Wright. Among both parties there was bad blood between multiple people. James Bowie and Major Norris Wright had fought not long before.

On Wednesday September 19, 1827 the parties met at the sandbar. The duelist fired two shots and missed. They resolved their duel with a handshake. At the conclusion of the duel the six proceeded to go celebrate survival. According to eye witnesses Cuny decided to fire on Crain while yelling "Col. Crain, this is a good time to settle our difficulty." Crain fired and hit Bowie in the hip. Bowie rose to his feet, drew his famous knife and charged Crain. Crain struck Bowie on the head with his pistol, sending Bowie to his knees. Norris Wright drew his pistol and shot at Bowie, missing. Wright then stabbed Bowie with his cane sword in the sternum. Wright was stabbed by Bowie as he attempted to pull his sword from Bowie. Bowie was then shot and stabbed again by other members but was still able to stand. He was shot once more by one of the Blanchard brothers before they fled. The entire brawl lasted 90 seconds.

Many were astounded that Bowie survivied his ordeal. Newspapers picked up the story, helping to further James Bowie's legend and that of his knife. Bowie had survived two gunshots and seven stab wounds.
Links: downloads.yahoo.com, southernmemoriesandupdates.com, www.stoppingpoints.com
1,608 views