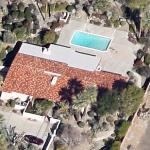 It has been reported that President John F. Kennedy's secret service detail stayed here in March 1962 when he and Marilyn Monroe stayed at Bing Crosby's which is located directly to the south.
Links: en.wikipedia.org
609 views