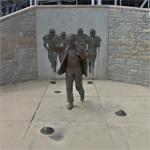 Joe Paterno was hired as an assistant coach by the university in 1950. He held that position for 16 seasons before being promoted to head coach in 1966. He compiled a record of 409–136–3 in 46 years as a head coach.

The statue was dedicated on November 2, 2001, two days after he surpassed Bear Bryant as the all-time Division I-A leader with 324 career victories.

Only July 22, 2012, the statue was removed by the University days after a report was released in the Jerry Sandusky child abuse scandal. The report implicated Paterno and other Penn State officials in covering up the story.
Links: en.wikipedia.org
1,202 views