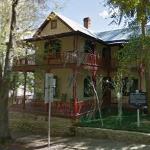 Nestled among beautiful shade trees, the John G. Riley historic home represents the thriving black neighborhood that once existed in what is just east of downtown Tallahassee. The Riley House is especially significant when compared to other such historical sites in that it is the last vestige we have of the accomplishments of an entire group of people, the black middle class, which emerged in the latter part of the nineteenth century.

During the late nineteenth and early twentieth centuries, the area just east of downtown Tallahassee and west of Myers Park Drive was an African American community called Smokey Hollow. According to the Tallahassee City Directory, published in 1904, there were five houses on Riley's block on Jefferson Street, all owned by black men. In 1919, there were six homeowners and they too were black. Several other homes, owned or rented by blacks, surrounded the Riley property, extending up College and Gadsden Streets. This situation changed in the 1950's, when plans for the Department of Transportation Building and the expansion of Apalachee Parkway encroached into the boundaries of the Smokey Hollow community. By 1978, only two houses remained, that of John Riley and John Hicks, a black tailor who lived across the street from Riley. Hicks died in the early 1970's and his home was purchased by Colmar Corporation for speculative purposes.