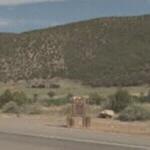 John H. Tunstall Murder Site
In one of the Lincoln County War's most violent encounters, John H. Tunstall was shot and killed at a nearby site on February 18, 1878. Tunstall's death set off a series of violent reprisals between his friends, among whom was William "Billy the Kid" Bonney, and forces of the Murphy/Dolan faction of this tragic conflict. Tunstall, an English businessman, came to New Mexico in 1876.