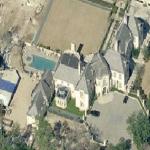 Havens graduated from Harvard University in 1979 and his first job was trader of convertible securities at Kidder Peabody.

He joined Morgan Stanley in 1986 as a principal in Institutional Equity. where he struck up a personal and business relationship with Vikram Pandit where the two rose through the ranks until he and Pandit left after being passed over by Philip J. Purcell in 2005. The two formed Old Lane LP which was in turn was bought by Citigroup in 2007 for $800 million.

At Morgan he was a managing director and Global Head of Institutional Equity Division from September 2000 to March 30, 2005.

At Citi he was the highest paid official in 2009 and 2010 when he was paid more than $9 million/year at a time when Pandit was making only $1/year as Citi was dealing with bringing the company out of near collapse and was subsidized by $20 billion in Troubled Asset Relief Program (TARP) funds.In January 2011, he became president and COO a month after Citi paid back its TARP loans. The position had been vacant since 2007.

Prior to his promotion he was Chief Executive Officer of the Institutional Clients Group at Citi. He departed Citi along with CEO Vikram Pandit on the 16th of October 2012.
1,845 views