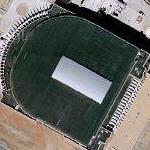 By kjfitz @ 2010-01-01 13:20:43
@ 38.046023, -78.506818
Charlottesville, Virginia (VA), US
John Paul Jones Arena, or JPJ, opened for the 2006–2007 NCAA Division I basketball season and is located at the University of Virginia in Charlottesville, Virginia. It has seating for 14,593 fans, nearly twice the capacity of 8,457 at Virginia's previous facility, University Hall. The design features pergolas on the outside to tie in the design with Scott Stadium, UVa's football facility. This style is known as Jeffersonian architecture, reminiscent of the many buildings designed by Thomas Jefferson on UVa's grounds and nearby.
Links: en.wikipedia.org
816 views