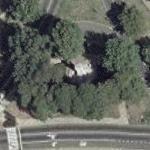 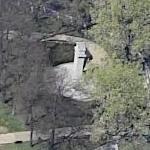 The first monument raised in Potomac Park, in 1912, immortalizes the spiritual father of the United States Navy, and the best-known naval hero of the Revolutionary War. A fitting tribute to John Paul Jones' dignity and tenacity, the memorial depicts Jones in 10-foot-tall bronze, cast by New York sculptor Charles H. Niehaus. As Niehaus intended, Jones appears calmly resolute, very much in command and unbeatable. The statue is backed by an elegant marble pylon, with a bas-relief on the reverse side showing Jones raising the Stars and Strips aboard his famous ship, the Bonhomme Richard -- an act believed to be the first hoisting of an American flag on an American warship. Intricately stylized dolphins spewing water on either side of the monument add a touch both serene and nautical. Perhaps best capturing the spirit of John Paul Jones are the monument's engraved words: "Surrender? I have not yet begun to fight."
Links: local.mapquest.com
979 views