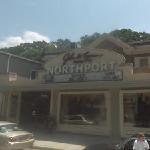 A not-for-profit organization, the Northport Performing Arts Center, acquired and modified the theater for use as a live venue, and it now the John W. Engeman Theater.
Links: www.engemantheater.com
915 views