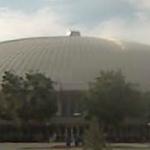 By kkeps @ 2011-12-29 10:36:50
@ 40.761038, -111.837918
Salt Lake City, Utah (UT), US
Jon M. Huntsman Center (formerly known as the Special Events Center) is a 15,000-seat multi-purpose arena on the campus of the University of Utah in Salt Lake City, Utah. The arena opened in 1969 and is named after chemicals entrepreneur and philanthropist Jon M. Huntsman, father of Utah's former governor Jon Huntsman, Jr.. From its opening until the completion of the Delta Center (now known as the EnergySolutions Arena) in 1991, it was Salt Lake City's premier sports and entertainment venue. Architecturally, it is known for its steel cloud, which hangs from the arena's silver dome interior. The steel cloud holds the arena's center court scoreboard, sound and lighting systems.
Links: en.wikipedia.org
824 views