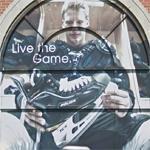 Staal was the second overall pick in the 2006 NHL draft. His three brothers also play pro hockey - two of them in the NHL (Eric and Marc) and one in the minor leagues (Jared). Jordan's first six seasons were with the Pittsburgh Penguins. He was traded to Carolina in the summer of 2012.