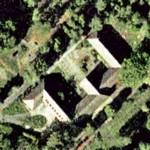 After 1945 it became a junior high school for the East German FDJ (socialist youth movement of the German Democratic Republic and the Socialist Unity Party of Germany) and more buildings were build.
Links: www.bunker-kundschafter.de
1,027 views