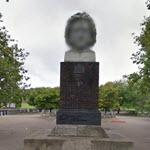 The Crystal Palace building was initially constructed in Hyde Park in central London to house an exhibition in 1851 that was entitled "The Great Exhibition of the Works and Industry of All Nations". The exhibition ran from May to October 1851.

The Crystal Palace was destroyed by a fire towards the end of 1936 and all that now remain are the foundations and some statues.

The bust of Paxton was commissioned to mark the 20th anniversary of the Palace and to commemorate Paxton, the architect. This was also moved a short distance in 1981 and rotated through 180° so that Paxton is now looking away from the site of the Palace.
Links: www.pmsa.org.uk, historicengland.org.uk, www.victorianweb.org
327 views