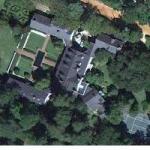 By forthefallendrms @ 2011-08-22 09:30:27
@ 33.553435, -81.723215
Aiken, South Carolina (SC), US
Joye Cottage, the greater portion of which dates from 1897, is a rambling weatherboard Georgian Revival residence, consisting of a central block with four radiating wings. Joye Cottage is one of the oldest and largest of Aiken’s winter retreats for the wealthy. It is also important as a relatively intact example of the architecture expressive of the lavish scale of living practiced in Aiken’s Winter Colony. The cottage building represents the extensive remodeling of an existing building done ca. 1897 by New York architect George A. Freeman for William C. Whitney. The property includes Joye Cottage, the centrally located home on the map, Whitney stable in the upper left hand corner, and the 2-story Whitney Squash Court House in the lower right hand corner of the map.
Links: www.nationalregister.sc.gov
1,187 views