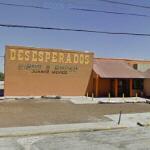 In the early hours of Sunday, 14 November, an armed band led by an unidentified woman entered the bar and began shooting, killing five and injuring nine.

Those killed would be a small addition to the over 3,000 murders committed in Juárez during 2010, making it one of the most dangerous cities in the world for that year.
Links: www.usatoday.com
783 views