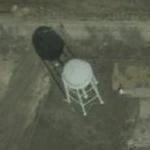 My guess: in 2010 this water tower will have been removed because it doesn't jive with the new Starbucks nearby or all of the Suburban Sprawl surrounding this location.