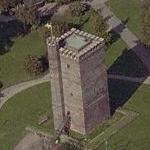 By alfjon @ 2007-11-20 13:42:09
@ 56.048527, 12.697617
Helsingborg, Sweden (SE)
Kärnan (Swedish) or Kernen (Danish, both meaning The Core), is a medieval tower in Helsingborg, Scania, in southern Sweden. It is the only part remaining of a larger Danish fortress which, along with the fortress Kronborg on the opposite of Oresund, controlled the entranceway to the Baltic Sea.

The origins of the Helsingborg fortress is disputed but Danish legend places its origin to the reign of the legendary king Fróði. This legend has not been supported by archaeological proof but both records and archaeological proof have traced the structure to the early 13th century. It was considered the most important fortress in Denmark, and was integral in securing control over the strait between Scania and Zealand. It was surrendered to Sweden along with the rest of Skåneland as part of the 1658 Treaty of Roskilde. The fortress was retaken by Danish forces in 1676 during the Scanian War, and its capture celebrated by flying a giant Danish flag above it. This flag, measuring 17x7 meter, was later captured by the Swedish army and is preserved in the Stockholm Army Museum.

The fortress returned to Swedish control by the Treaty of Lund in 1679. Charles XI of Sweden ordered most of it demolished fearing that it was too exposed to a sneak attack from Denmark. The remaining parts of the fortress fell into disrepair and major renovations did not commence until 1893-1894. The building's cannellated "crown" dates from these repairs.
Links: en.wikipedia.org
684 views