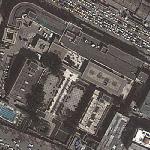 By Mike1989 @ 2014-05-04 11:53:25
@ 34.520153, 69.178296
Kabul, Afghanistan (AF)
Kabul Serena Hotel is a luxury hotel in central Kabul, Afghanistan. It is set in landscaped gardens, overlooking the city's famous Zarnegar Park. Originally built in 1945, the hotel has been completely refurbished and extended in recent years, reopening in 2005. The Hotel houses the Australian embassy in Afghanistan. It has also twice been the subject of terrorist attacks, once in January 2008 and once more in March of 2014.
The 2014 Kabul Serena Hotel attack was a firearm attack on the restaurant of the Kabul Serena Hotel, in Kabul, Afghanistan on March 20, 2014 for which the Taliban claimed responsibility. Four teenage gunmen entered the restaurant of the hotel, opening fire with handguns against patrons and sparking a three-hour standoff with Afghan security forces. At least nine people were reported killed in the assault, including five Afghans and four foreigners.
Links: en.wikipedia.org
719 views